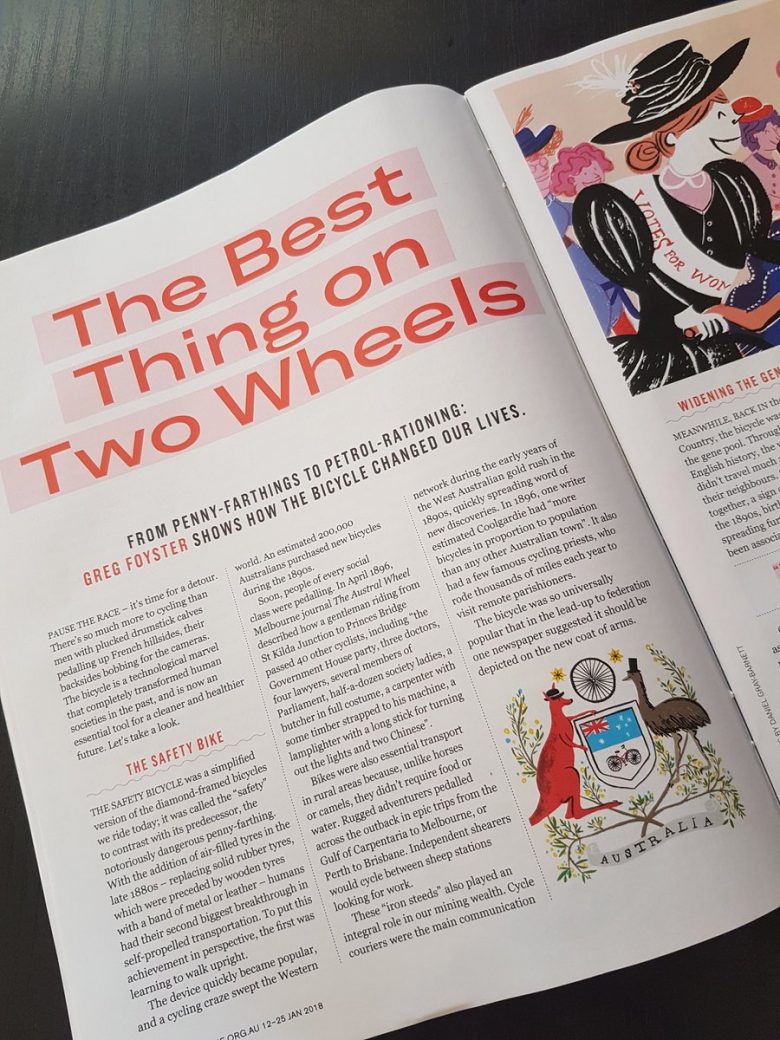 The safety bicycle was a simplified version of the diamond-framed bicycles we ride today. (It was called the ‘safety’ to contrast with its predecessor, the notoriously dangerous penny-farthing.) With the addition of air-filled tyres in the late 1880s, humans had their second biggest breakthrough in self-propelled transportation. To put this achievement in perspective, the first was learning to walk upright.

The device quickly became popular, and a ‘cycling craze’ swept the Western world. An estimated 200,000 Australians purchased new bicycles during the 1890s.

Soon people of every social class were pedaling. In April 1896, Melbourne journal The Austral Wheel described how a gentleman riding from St Kilda Junction to Princes Bridge passed 40 other cyclists, including “the Government House party, three doctors, four lawyers, several members of Parliament, half a dozen society ladies, a butcher in full costume, a carpenter with some timber strapped to his machine, a lamplighter with a long stick for turning out the lights, and two Chinese.”

Bikes were also essential transport in rural areas because, unlike horses or camels, they didn’t require food or water. Rugged adventurers pedaled across the Outback in epic trips from the Gulf of Carpentaria to Melbourne, or Perth to Brisbane. Independent shearers would cycle between sheep stations looking for work.

These ‘iron steeds’ also played an integral role in our mining wealth. Cycle couriers were the main communications network during the early years of the West Australian goldrush in the 1890s, quickly spreading word of new discoveries. In 1896, one writer estimated Coolgardie had “more bicycles in proportion to population than any other Australian town”. It also had a few famous cycling priests who rode thousands of miles per year to visit remote parishioners.

The bicycle was so universally popular that in the lead-up to federation one newspaper suggested it should be depicted on the new coat of arms. 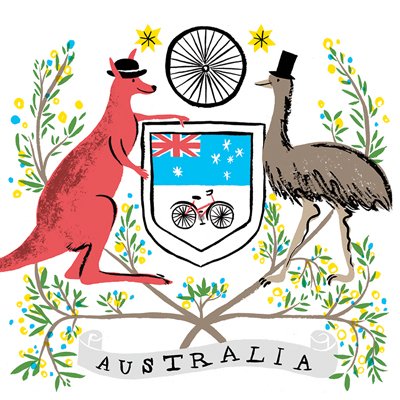 Meanwhile, back in the Mother Country, the bicycle was helping to freshen the stagnant gene pool. Throughout most of English history, the working classes didn’t travel much and tended to marry their neighbours. Surnames clustered together, a sign of inbreeding. But from the 1890s, birth records show surnames spreading further from the areas they’d been associated with for ages.

One study of rural Dorset found that as bicycles became cheap and available, marriages to partners living six to twelve miles away increased significantly. After a hard day’s work, few men had the energy to walk that distance, but they could cycle it.

A 1975 New Scientist article quipped that a young male with a bicycle was at a distinct advantage in spreading his genes “particularly if he lived at the top of a hill”. Biologist Steve Jones, author of The Language of Genes, has even suggested the invention of the bicycle might be the most important event in recent evolutionary history. (Mention that the next time someone claims bike seats cause impotence.)

The bicycle changed life for women too. By the 1890s, physical recreation was becoming more acceptable for ladies and new ‘drop frame’ designs allowed for cycling in skirts. Big cities soon boasted large numbers of female riders, as many as 2000 in Sydney in 1898.

In Melbourne, the best known ‘cycliste’ was Lady Brassey, the wife of the Governor of Victoria. After she was seen cycling along St Kilda Road, The Bulletin reported a big surge in requests for ladies bicycles. (Apparently she was also rather fond of playing bicycle polo on the lawns of Government House.)

As Fiona Kinsey explains in the book Scorchers, Ramblers and Rovers, the bicycle allowed women to travel unchaperoned, extended their world beyond the domestic sphere and provided a legitimate reason to reject restrictive forms of dress. The politically progressive and independent ‘New Woman’ of this era was closely associated with cycling, a stereotype lampooned in a 1896 sketch titled ‘The Cult of the Modern Maid’ (see picture). “It was said that many women rode to suffrage on the bicycle,” writes Kinsey.

Like most new inventions, the bicycle was exploited for military advantage. Cyclists were first employed in the Boer War (1899-1902) as swift messengers and silent scouts (in fact, the Queensland Imperial Bushmen’s unit sent 51 men on government-issued bikes). Later, two-man ‘war cycles’ were manufactured with special wheel rims to travel on railways lines. They didn’t need steering, freeing the riders’ hands to operate a machine gun.

By the start of World War I, the British army had 14,000 men in cyclist units. They were everywhere during the early weeks of fighting, riding ahead of all other forces and capturing important positions. Australia also had an ANZAC Cyclist Battalion, comprised of many men who had transferred from the Light Horse regiment and had never ridden a bicycle before.

But the aeroplane and heavy artillery soon transformed battlefields into a quagmire of trenches and no man’s land strung with barbed wire – not ideal terrain for cycling. So bicycles were used mostly behind the lines for transporting supplies, and only 13 members of the Australian cyclist battalion were killed.

It was Japanese who showed how, in the right circumstances, the bicycle could win a conflict. In World War II, Japanese infantry units cycled down the Malayan Peninsula in just 70 days to take Singapore. “They pedalled into military legend,” writes Jim Fitzpatrick in his book Wheeling Matilda, “stunning their Australian and other British Empire enemies with the speed of their advance and ability to carry out rapid flanking manoeuvres.”

The first detailed road maps for South Australia, Victoria, New South Wales and parts of Tasmania appeared in cycling journals. Next time an angry driver tells you to “get off the road”, kindly inform him that if it weren’t for cyclists he wouldn’t know the road was there in the first place.

One champion cyclist and pioneering map-maker, George Broadbent, became a founding member of Royal Automobile Club of Victoria. (That’s right, even the motoring lobby was a cyclist’s idea.) Apparently Broadbent was also a regular speeder. In motoring history books there’s a story about him being charged and found guilty of driving in Melbourne at the horrendous speed of 24 kilometres per hour. He was apprehended by a policeman on a pushbike.

And with that anecdote our story, too, comes to a skidding halt. It’s an appropriate place to end: by the time Broadbent was nabbed for speeding, the car was poised to overtake the bicycle as a preferred mode of transport. By 1930, Australia was one of the most car-centric nations on Earth – only the US and New Zealand had more cars per person.

But the bicycle’s remarkable journey continued. Commuter cycling boomed again during the petrol-rationing days of World War II and the oil shock of the 1970s. Globally, bikes became the transport of the masses in communist China, a key element of northern Europe’s ‘liveable’ cities, and, most recently, an essential tool for cutting pollution and reducing obesity. A 2015 study estimated four out of ten households around the world have a bicycle: that’s 580 million machines for solving climate changing and improving health, ready to hit the road.

Australia is still behind the pack – the national cycling participation rates have actually dropped since 2011, perhaps explained by our aging population – but some inner city suburbs are surging ahead. As transport expert Alan Davies has pointed out, more Melburnians now cycle each weekday than take trams or buses.

Looking back, the bicycle has been many things: engineering novelty, niche speed machine, tool of war, and even vehicle of emancipation. Most of all, though, it’s been a popular and convenient way to get around: the daily transport of millions of people across the world for more than a century. Now that’s a feat of endurance.