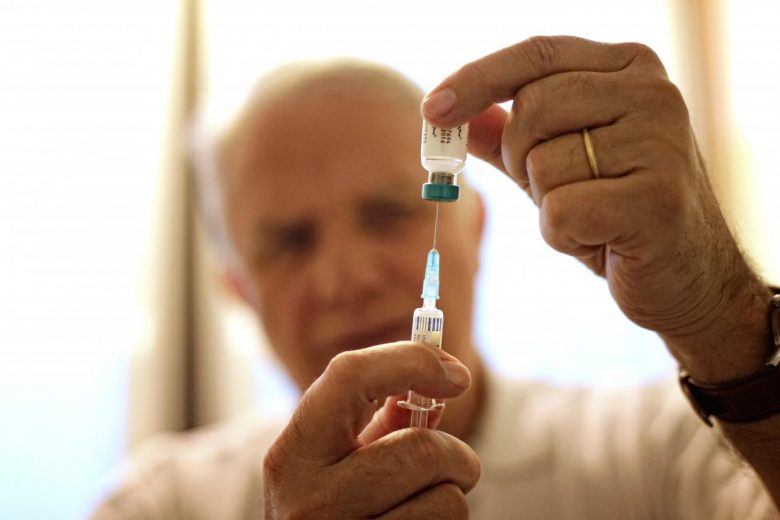 It’s not what I expect. The film centres on accusations of scientific fraud at the United States Centres for Disease Control and Prevention (CDC), alleging a cover-up over a link between measles, mumps, rubella (MMR) vaccine and autism. This conspiracy theory is juxtaposed with heart-wrenching footage of severely autistic children struggling to speak. We see grainy home video of injured, wailing babies. “Jesus,” whispers a man in front of me. I came here highly sceptical, but still I scribble in my notebook: What if it’s true? Those poor kids.

Later, I feel duped. Here’s what I should have known beforehand.

The film is directed by and stars Andrew Wakefield. Anyone previously exposed to this issue will groan at the name, and perhaps wonder how I could have been so ignorant, but childhood vaccination isn’t a topic that comes up very often if you don’t have kids. Plus there’s a whole new generation of parents out there who might not know the history, so it’s worth recounting.

In 1998, medical journal The Lancet published a paper by Wakefield and others proposing a link between MMR vaccine and autism. Although it was based on just 12 children, at a press conference Wakefield called the safety of the MMR vaccine into question, sparking a public health crisis. As the vaccination rate dropped, measles re-emerged in England.

It was later revealed Wakefield had received hundreds of thousands of dollars as a consultant to lawyers representing parents wanting to sue over the MMR vaccine. His data was falsified, and the British General Medical Council found Wakefield guilty of both misconduct and a failure to disclose conflicts of interest. He was branded “dishonest” and lost his licence to practise medicine. His original paper has now been retracted.

Meanwhile, scientists had been investigating his theory in Poland, Britain, the US, Japan and Denmark. None, including a Danish study of data from 537,303 children, found an association between MMR vaccine and autism. A 2012 review from the US Institute of Medicine (now the National Academy of Medicine) concluded: “The evidence favors rejection of a causal relationship between MMR vaccine and autism.”

“An enormous amount was spent trying to see if the claims in the Wakefield paper were true,” says Nobel prize-winning immunologist Professor Peter Doherty of the University of Melbourne. “It was looked at very thoroughly and no evidence was found to support it.”

Watching the film again after reading the literature, I find it incredibly misleading. It tries to discredit a single study from 2004, as if that were of pivotal importance, when in fact there’s a mountain of evidence against Wakefield’s theory. In the film, Wakefield is a reasonable-sounding doctor with a plummy British accent. In reality, he’s the author of a damaging fraud who is now preying on parents’ fears.

So why does the myth persist? Partly it’s the work of radical fringe groups manufacturing the appearance of a controversy, and people new to the topic, like me, who get sucked in. Media coverage can also fuel the myth and a few leading experts refused to comment for this reason.

Yet with the rise of social media, conspiracy theories can thrive in clusters of like-minded people on the internet. “I definitely agree they don’t need to be given coverage, but at the same time you can’t not address it,” says Dr Sue Rodger-Withers, a virologist who lives in the Northern Rivers region of New South Wales, an area with one of the lowest vaccination rates in Australia.

But actually, parents who refuse to vaccinate their children are a tiny minority. Most Australian children – about 93 per cent by age five – are fully vaccinated. Even during the Wakefield scare in Britain, Australia’s national MMR vaccination rate remained relatively stable.

However, some concerns about vaccination will probably always exist because they arise from a fundamental flaw in human thinking. The Science of Immunisation, a booklet from the Australian Academy of Science, explains that “some adverse events coincide with, but are not caused by, vaccination”.

The clinical signs of autism, for example, commonly occur in the second year of life, coinciding with the time when the MMR vaccine is given. “It appears to the parent that somehow the vaccination is responsible, particularly when you’ve got this climate [of controversy] out there,” explains Doherty. “That’s the problem – it’s a false correlation.”

The film exploits this all-too-human error, combining footage of suffering autistic kids with narrative about the MMR vaccine. In a heightened emotional state – those poor kids – I associated one with the other, even if the rational side of me wasn’t convinced.

Later, I showed the film to cognitive psychologist Stephan Lewandowsky of the University of Bristol, a global expert on misinformation. “People link two distinctive events, and the moment you have that linkage, it becomes difficult for that to ever be disconfirmed,” he says.

But pointing this out can come across as patronising. “You’re running the risk of hurting their feelings if you’re trying to correct that belief.”

Lewandowsky has conducted extensive reviews of the literature on why myths are so hard to correct. “Even putting aside all the emotion and politics and specific issues that people might feel strongly about, we know that processing a negative or a correction is difficult for simple cognitive reasons.”

In one well-known 1994 study about a fictitious warehouse fire, people were first told flammable substances were left in a closet, implying the business owners were negligent. They were then told that was false and the closet was actually empty. Despite understanding and accepting the correction, people still attributed negligence to the owners, based on the misinformation they knew to be wrong.

A follow-up experiment found that unless people were given another cause to explain the fire, they stuck with the original false version. “People prefer an incorrect model over an incomplete model,” writes Lewandowsky and another researcher, John Cook, in a guide to debunking myths. “In the absence of a better explanation, they opt for the wrong explanation.”

The problem with the MMR vaccine myth is there isn’t an easy alternative explanation for what causes autism. Scientists have identified genetic factors, environmental and biological influences and shifting diagnostic criteria as reasons for the increased number of cases, but no single cause can fill the cognitive gap left behind by debunking. The truth isn’t so seductively simple.

Worse, efforts to correct the myth can backfire. In a 2014 study, American parents were shown information debunking the link between MMR vaccine and autism. While this corrected the misperception, it also made parents who weren’t favourable to vaccines in the first place even less likely to vaccinate a future child. Other messages – such as a dramatic narrative about an infant who almost died from measles, and graphic images of sick children with spots from the disease – also didn’t work.

But there are a few ways forward – and one of them is inspired by the theory of vaccination itself. In the same way vaccines generate antibodies to resist viruses, psychologists are hoping to “inoculate” the public with counterarguments that will boost their immunity to bogus claims.

This year, two British researchers published a paper that used this inoculation technique to counter anti-vaccine conspiracy theories. People who were given the facts first were resistant to anti-vaccine conspiracy theories and were more likely to decide to vaccinate a hypothetical child. Lewandowsky has co-written a paper showing that inoculation messages can neutralise climate change misinformation too.

One of Lewandowsky’s recommendations is to include an explicit warning at the beginning – just like at the top of this article. While writing about a myth risks reinforcing it, exposing a little bit of anti-vaccination propaganda could help people build up intellectual antibodies, too.

This article was first published in the print edition of The Saturday Paper on 2 September 2017 as ‘League of vaccinations‘.