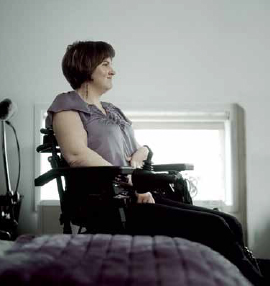 Nine-and-a-half years later, and not only can Anj speak — albeit in crushed syllables and short, concentrated bursts — but she’s using her hardearned powers of communication to teach high school students about the warning signs and repercussions of domestic violence.

Her courageous story earned the 26-year-old the title of Victoria’s Young Australian of the Year for 2011. She re-enacts the announcement, holding her fist beneath her chin as if she’s speaking into an invisible microphone, then feigning shock, letting her jaw hang slack. “I was gobsmacked,” she says. As part of the award, she’s met cricketer Adam Gilchrist, prime minister Julia Gillard and, most recently, the Queen.

It’s a story she’s not afraid to retell. She grew up in Benalla, a pretty blonde who represented her town in basketball and broke high jump records. “I was in the ‘popular group’,” she says of her time at school, making ironic air quotes with two fingers of her right hand. When she was 14, she fell for an older guy and over the next few years their rollercoaster relationship became abusive.

They broke it off on New Year’s Eve 2001, but remained in contact, and on a cool March night in 2002 they met at the deserted Benalla school grounds. He wanted to get back together. She didn’t. The abuse that had marked their relationship exploded into horrific violence.

He tried to strangle her, kicked her in the ear, slammed her head against a metal park bench and then stomped on her face, snapping her jaw. As she lay unconscious next to a tree, a shoeprint embossed on her bloody, swollen cheek, her attacker told the first person on the scene: “You can f–––ing look after it now.” He was later charged and jailed.

She spent eight weeks in the Royal Melbourne Hospital, five months in rehab and two years and three months in a nursing home. Her brain injuries were extensive and progress was slow.

“We used to have to lubricate her eyes because she couldn’t blink,” says her father, Ian, 56. It was nine months before she could move her thumb and five years before she could talk. Listening to the story of her recovery, Anj cheekily pokes out her tongue.

Even that simple gesture took her five months to relearn.

Now she types into a laptop, which reads her speech aloud, and since 2004 she’s told her story to some 14,000 students: on the kitchen bench of her small flat are two bunches of flowers from schoolchildren at Roxburgh College in Melbourne’s northern suburbs, which she had visited just that morning. After the presentation, a year 9 girl came up to her mother, Helen, 52, and said: “What I take away today is hope — hope you can get through anything in this world and achieve what you want if you just work hard enough at it.”

Since her life changed in 2002, this inspiring young woman who’d “try anything once” hasn’t let a wheelchair stop her from having new adventures. She’s ridden in a helicopter and a V8 supercar and has even gone skiing at Mount Buller (using a sitdown ski). Now that’s she’s living in central Melbourne, she likes to visit cafes and go to the movies.

Nor has she lost her romantic side. Tacked to the wardrobe is a list of her goals. One reads: “Only reply to messages from guys I’m interested in, let them chase me.” Another says: “Take things slow when I first start dating …” “The other day, she was telling me she wants a loving, caring man,” says Helen. After a pause, she adds: “But he has to be good.”

While Anj’s right hand gives us the finger, her left hand lies rigid in her lap. The wrist is cocked at an alarming angle, the fingers curled into a frozen claw.

On the middle finger is a small heart-shaped ring.