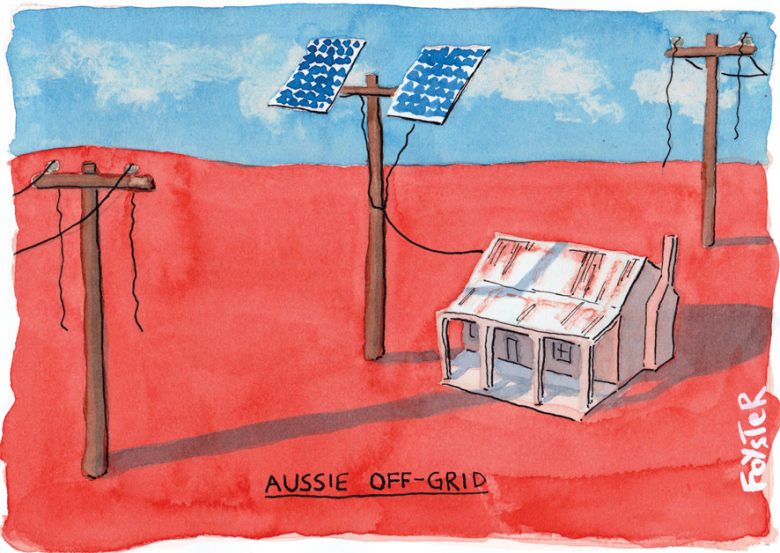 To see how, let’s visit another hub of innovation… South Australia. The state now sources 40 per cent of its electricity from the sun and wind. South Australia has relatively little coal resources, excellent locations for wind farms and traditionally higher wholesale electricity prices, making it the most attractive region for investment under the federal Renewable Energy Target. The progressive Labor government also introduced stable policies to support the growth of clean energy. Measured per person, the state is second in the world for the amount of installed wind and solar power, ahead of renewable energy powerhouses Germany and Denmark.

The rest of Australia lags well behind. We’re world leaders for rooftop solar – one in seven households now boastfully displays roof bling to the street – but about 85 per cent of our electricity still comes from polluting fossil fuels.

As the bright sparks of Silicon Valley might say, we’re still stuck in Electricity 1.0. Our electricity grid is old, dumb, centralised and unresponsive. Power stations in regional locations burn coal or gas to generate electricity, which is then transported hundreds of kilometres to cities and towns.

Electricity 2.0, in contrast, is new, smart, decentralised and responsive. Coal and gas power stations are phased out, complemented then replaced by a proliferation of innovative, clean technologies. Rather than a few big generators, there are many smaller ones, geographically distributed but interconnected and able to talk to each other.

Rooftop solar is the best example. You can still import electricity from the grid, but you can also export the surplus power you generate when the sun is shining brightest. In a historical context, this is revolutionary: households are no longer just passive energy users. They’re mini power stations. And as batteries become more affordable, households will store electricity for use day and night, changing the game forever.

Even wind power, an older and more mature renewable technology, is wreaking havoc with outdated business models. Coal power stations were built to operate continuously, so it’s inefficient and expensive to turn them off and on. But wind power underbids coal on the wholesale electricity market, making some of these power stations uneconomic. In South Australia, two coal power stations have closed as a result, the last one in May 2016.

It’s going to keep happening. The Australian Energy Market Operator, whose job it is to ensure the lights stay on, forecasts that over the next twenty years mainly wind and solar power stations will be built in Australia’s national electricity market. No coal plants are forecast for decades. Fossil fuel generators are on the way out, and renewables just keep getting cheaper – from 2009 to 2014, the price of photovoltaic solar panels dropped 80 percent, and wind turbines by a third.

On top of that, there’s climate change (as if we needed reminding). As part of the Paris climate agreement, Australia has pledged to reduce its carbon emissions by 26-28 per cent below 2005 levels by the year 2030. Based on this, the market operator assumes 400 to 1200 megawatts of brown coal power in Victoria will shut down in the next few years. That’s up to three-quarters of Hazelwood, a 1600-megawatt brown coal power station in the Latrobe Valley and Australia’s dirtiest utility. And that’s to meet an emissions reduction target that most analysts say is woefully inadequate.

Then there are federal and state renewable energy targets; pressure on banks not to loan to fossil fuel industries; rising maintenance costs (the average power plant in Australia is 36 years old) – and looming mine rehabilitation expenses. Coal power stations have a lot stacked against them. It’s no longer a question of if they will close, but when.

Some regions where power stations will close are already among the most disadvantaged in Australia, and poor people shouldn’t bear the brunt of the country’s shift to clean energy. Change is inevitable, but fairness isn’t.

Electricity 2.0 is coming. Pretending it isn’t happening won’t stop it. With some forward planning and creative thinking, governments can help communities adapt. Take it from Arnie – when the future hurtles into view, you don’t want to be the last guy left sitting on a horse and cart, holding the buggy reins.

Remember the bill shock from a couple of years ago? From 2006 to 2013, average retail electricity prices in Australia increased by about 70 per cent. Since then the price has risen slowly, by about 1 per cent. What’s been going on?

It helps to understand what makes up the average electricity bill in Australia. Environmental policies are the smallest part, about 6 per cent of your bill. Actually generating the electricity is 28 per cent, and retailing (i.e. selling it to you) is 19 per cent. That leaves the bulk of the bill, 47 per cent, just to pay for the poles and wires that bring electricity to your house.

The biggest cause of electricity price rises over the last decade has been to upgrade those poles and wires. In some states they were old and needed replacing, but they were also upgraded to meet forecast ‘peak demand’ – the few hours a year, usually during summer, when everyone turns on their air conditioners at once.

The problem was the demand forecasts were wrong, so we’ve spent billions on electricity infrastructure upgrades we might not need. (This is the ‘gold plating’ you’ve probably heard about.)

What about the impact of renewable energy on power prices? It’s complex. Rooftop solar reduces peak demand, meaning less money should need to be spent on upgrading poles and wires in the long term. Wind power underbids fossil fuel generators, lowering the wholesale electricity price, which reduces your power bill. But the Australian Energy Market Commission, who set the rules for the power system, argues that as more renewable energy enters the grid, coal power stations will close, and this could increase power bills.

Whatever happens, we also need a ‘Just Transitions’ approach to electricity bills. People on low-incomes are more likely to live in poorly insulated homes that are expensive to heat and cool, so they bear the brunt of any increase in power prices. They also might not be able to afford the upfront costs of technology that can reduce bills, like rooftop solar. Governments can address this inequality through energy efficiency schemes to upgrade our substandard housing, and loans to low-income households to install solar.

A shorter version of this article was first published in The Big Issue (Ed #521).