My climate change denial is worse than Malcolm Roberts’ 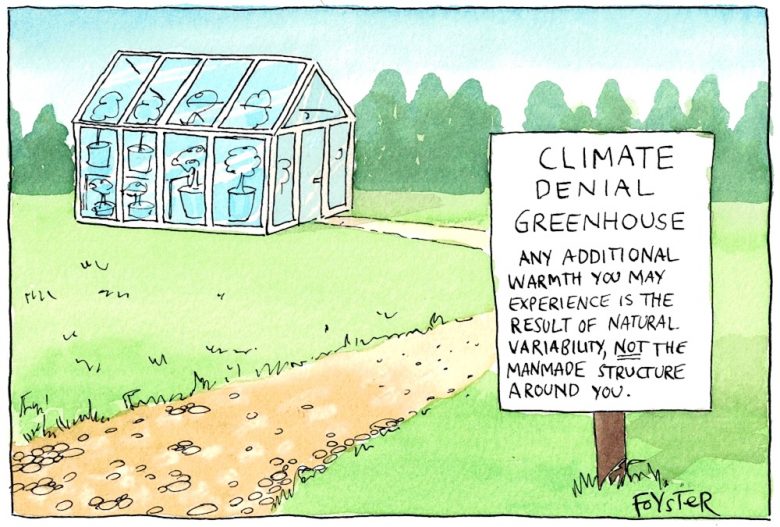 ‘HOW DO I EVEN BEGIN to come to terms with this barrage of bad news?’ So begins a journal entry I wrote in March this year after reading recent reports on climate change.

In January, swathes of ancient forest in Tasmania had burned in bushfire. February 2016 was a scorcher — the warmest February in 136 years of modern temperature records, explained NASA, an unprecedented 1.35 degrees Celsius above the average. By late March I was looking at images of a bleached Great Barrier Reef and feeling similarly blanched of colour.

I went for a walk, breathing heavily, looking at my feet. It was sunny. Ominously warm.

Fifteen minutes later, when I returned to my desk, I’d dismissed everything I’d read. My mood was buoyant again, based on absolutely no new evidence. I turned off my computer, and threw the report I’d been reading in the recycling bin. I simply didn’t want to know about it. 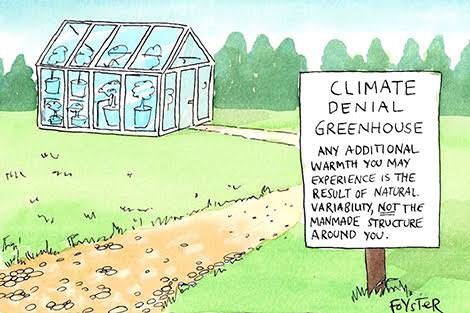 This is my denial, the denial of someone who understands and accepts the reality of global warming, has made changes big and small to reduce his personal environmental footprint, but still needs to shut out the news reports just to remain sane.

Then, in September this year, I watched another variety of denial play out, as newly elected One Nation Senator Malcolm Roberts gave his maiden speech in parliament.

It’s hard to overstate just how backwards and isolated this man’s views are. Denying the basic facts of climate change means rejecting the consensus view of qualified scientists on the topic, every major scientific institution and all the world’s governments. It’s quite a feat of confirmation bias.

But Roberts is even further on the fringe — he questions whether the atmosphere can warm the Earth at all. ‘The sun warms the earth’s surface,’ he said in his maiden speech. ‘The surface, by contact, warms the moving, circulating atmosphere. That means the atmosphere cools the surface. How then can the atmosphere warm it? It cannot. That is why their computer models are wrong’

Wow, what a blooper. As Professor Matthew England, from the University of New South Wales (UNSW) Climate Change Research Center, explained in response: ‘This denies that the atmosphere has any heat storage capacity, or that greenhouse gases re-radiate heat back down to the Earth. This really is high school geography that Malcolm Roberts has messed up here. We have known about the greenhouse effect since about the middle of the 19th century.’

What’s most interesting, I think, is that Roberts has popped up in parliament at precisely the time his variety of denial has faded to the margins. Climate sceptics have always been a fringe minority in Australia. But due to the disproportionate amount of airtime and column space they get in the media, people think there are more of them than there actually are. If you ask people what view others hold on the topic, as a CSIRO survey did, they’ll say 23 per cent of people think climate change is not happening. In fact, fewer than 8 per cent of people have that view. It’s a tiny group.

The latest survey data, released by The Climate Institute this month, shows that the great majority of Australians — 77 per cent — believe that climate change is occurring. In 2012 it was 64 per cent, so it actually increased during Tony Abbott’s carbon tax scaremongering and brief reign as prime minister. ‘Though questioning the science about the causes of climate change has been the focus of debate over much of the last decade in Australia,’ explains a summary of the report, ‘any impact it has had is waning.’

Plus, with the Paris climate change agreement in December 2015, there’s now international consensus to curtail global warming, making Roberts’ brand of climate denialism an embarrassing relic. Instead, we’ve moved on to a new phase of denial — the kind I’ve suffered from.

What is denial? The late British sociologist Stanley Cohen described three varieties: literal, interpretive and implicatory. Literal denial is the blanket assertion that something did not happen or is not true (such as Roberts’ rejection of the greenhouse effect). Interpretive denial is accepting the facts but giving them a different spin through euphemism, technical jargon or shifted emphasis. An example would be accepting that global warming exists, but arguing it’s a good thing for some reason.

Implicatory denial is something different, and much more interesting. It’s when we accept the information, but suppress the ‘psychological, political and moral implications that would conventionally follow’. This is the form of denial we practice when we’re concerned about climate change but want to continue polluting behaviours like flying overseas for holidays. It’s a way of letting ourselves off the hook.

Sociologist Kari Marie Norgaard explored this deliberate dis-attention while staying in a small Norwegian town during an abnormally warm winter. Her book, Living in Denial, documents how residents didn’t want to deal with the emotional implications of climate change, so they avoided speaking about it. As one man told her, holding his hands in front of his eyes as he spoke, ‘People want to protect themselves a bit.’

I know the feeling. That’s exactly why I threw that climate change report in the bin — to protect myself from feeling scared or hopeless.

For decades, researchers thought the lack of action on climate change was due to lack of knowledge. This concept was called ‘the information deficit model’. ‘If people only knew the facts!’ went the catchcry as scientists, government agencies and environment groups presented the public with their most convincing statistics and temperature charts.

It hasn’t worked very well. Humans aren’t spreadsheets with legs, weighing up the pros and cons of every action rationally. We’re emotional creatures, and we interpret information through all sorts of filters — values, worldviews, identity, even social etiquette. We also have defence mechanisms to block out bad news. That’s why the psychology of climate change, including how to deal with denial, will be crucial to our response.

But it’s not the literal denial of Malcolm Roberts that will be a barrier in the future. That phase is over. It’s the subtle, unspoken denial of people who fully accept the science, but deny the implications because they’re just too troubling to think about. People like me … and maybe you.