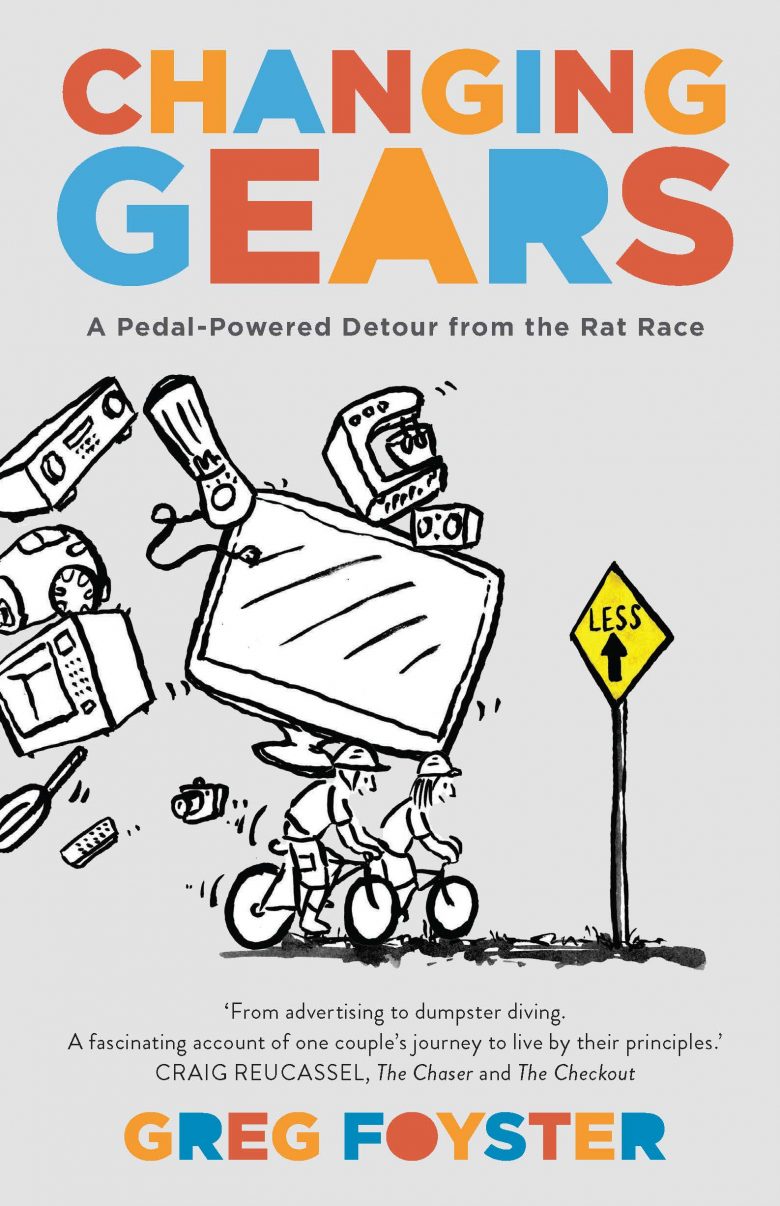 From March 2012 until November 2012, my partner and I embarked on an improbably long cycling odyssey up the east coast of Australia, researching a book about simple living. You can follow the journey at www.simplelives.com.au. If you search the site hard enough, you might even find photos of me naked. (Unlike my self portrait, these pictures aren’t in the least bit flattering.) The book, titled Changing Gears: A Pedal-Powered Detour from the Rat Race, was released in spring 2013.

Some copies of the book are still available in Dymocks stores and independent bookstores (travel section or memoir section), but you’re better off picking it up online at one of the following sites:

“Their adventures together are funny, poignant and life-changing…” David Enticott, The Sunday Age.

“Inviting his readers into their adventure, Foyster often addresses us directly. This, with observations and reflections about our world offered with self-deprecating humour, makes this book an utter treat. Verdict: possibly life-changing.” Cheryl Jorgensen, The Courier Mail

“Narrating their journey in a lighthearted way, the reams of information Greg relays are nicely balanced by the eccentric characters the couple meet…an informative text that’s an accessible read – the stories throughout the journey are inspiring, and never overwhelming…” Readings Monthly

“This engaging memoir explores green initiatives including the concept of “voluntary simplicity”; communal housing and local and seasonal produce.” Thuy On, The Age u0026amp; The Sydney Morning Herald

“He’s not exactly Bear Grylls, which is what makes his tale so fascinating and funny.” Jonty Bell, Smith Journal

“From suburban greenie to permaculture guru; from co-housing projects to a solitary figure walking the roads with a swag on his back; from suburban gardening to dumpster diving; and from vegetarianism to eating roadkill, this book covers as much lifestyle territory as Greg and Sophie cover in distance on their bikes….It’s written in a self-deprecating style that will often have you smiling to yourself.” John Knox, ReNew magazine

“Changing Gears is the endearing story of a man who looks at himself squarely and, reassessing what is really important, disconnects from a culture that seems complacent with being nudged into ‘normalcy’.” Green Lifestyle

“…what comes through is Foyster’s sharp, intelligent analysis of alternatives to the consumer culture of work/earn/spend that provides a hopeful blueprint for a saner way of living.” Slow Magazine

“Tone is all-important in a book like this and Foyster has done very well not to hector the reader. Changing Gears is informative without being overwhelming, and pensive without being ponderous. (It’s also quietly and self-effacingly humourous.)” Vin Maskell

“It was honest, it was engaging, funny, made me think, and ultimately… damn inspiring.” cityhippyfarmgirl.com

“From advertising to dumpster diving. A fascinating account of one couple’s journey to live by their principles.” Craig Reucassel, The Chaser and The Checkout

“If your lifestyle clashes with your values, if you want to change how you live but need a push to get you there, this is a must-read book for you.” Rhonda Hetzel, author of Down to Earth

“A compelling ride to the future we are all creating.” Costa Georgiadis, host of Gardening Australia

“At first, Greg Foyster and the cast of characters he meets on his journey all seem a bit mad. Oh, how we need mad bastards like these. Changing Gears opens up new approaches to the way we live our lives, without the discomfort of saddle rash that Greg had to go through.” Sean ‘The Birdman’ Dooley, author of The Big Twitch

“Australians are not doing it tough”, Eureka Street, September 1, 2013.