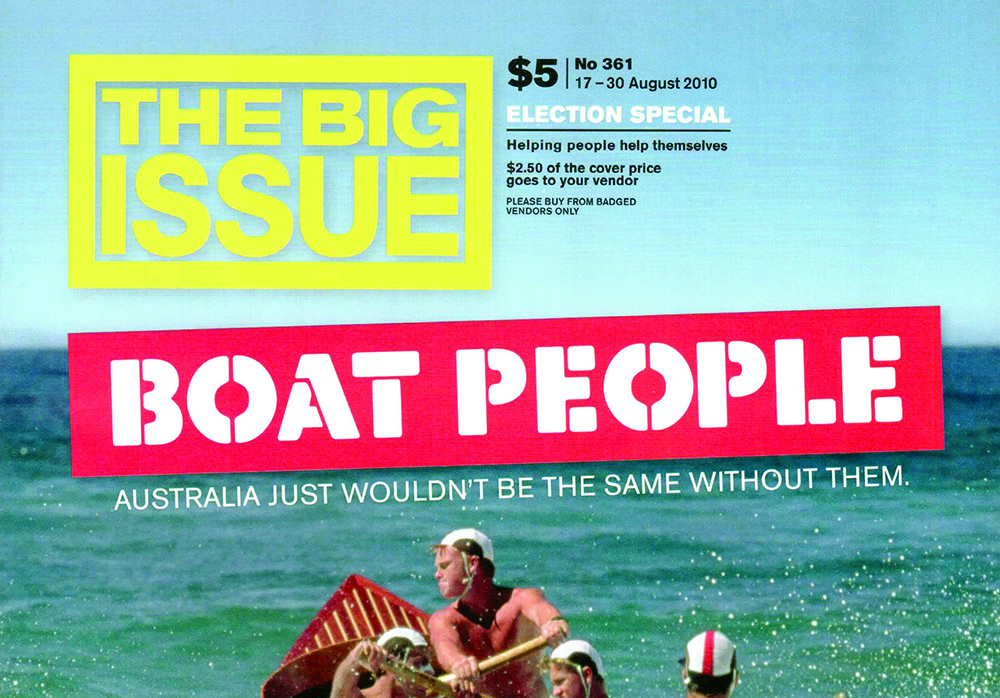 From the middle of 2007 to near the end of 2008, this was Soriyan’s life. He was a constant commuter, caught between a place where he was forced to leave and a place where he wasn’t allowed to stay. The relentless monotony of daily train travel was, in a way, a symbol of his plight. Soriyan is an asylum seeker, a Tamil who fled persecution. At the time he was adrift in Australia without a home, job or visa: a young man on track to poverty and depression.

Amid the deafening media hysteria over ‘boat people’, it’s hard to hear the quiet, unassuming voices of people like Soriyan. Just for a moment, let’s turn off the talkback commentary and tune in to the stories of real asylum seekers, if only to be reminded who they are and why they come to Australia. On a basic level, asylum seekers are people who’ve fled their homeland and are looking for shelter. Seen from this perspective, asylum seekers are the ultimate homeless: people who don’t even have a country to call their own, let alone a fixed address. Sadly, once they’ve been allowed to stay in Australia, that homelessness often continues. “If you read about asylum seekers, the focus is always on the political or policy issues. No one ever talks about the homelessness issue, but it’s massive, and it’s increasing,” says Cyril O’Connor, manager of the House of Welcome, a charity offering accommodation and support to asylum seekers in Sydney.

It seems almost everyone overlooks the issue. The Australian Bureau of Statistics doesn’t count the number of homeless asylum seekers living in the community, and they were not mentioned in the Rudd Government’s 2008 White Paper on homelessness. They are not eligible for public housing, and they can’t access government bond schemes in many states and territories, including Victoria and Western Australia. They are rejected by real estate agents and turned away from homeless refuges, which are set up to cater for people with different needs, such as substance dependence. And although asylum seekers are technically eligible for some longer-term ‘transitional’ accommodation, they are often refused due to lack of income.

Yet the Hotham Mission Asylum Seeker Project in North Melbourne estimates there are 8000 to 10,000 asylum seekers living in the community. Where are they supposed to sleep? The answer is: anywhere they can. Asylum seekers spend the night at train stations and on park benches, at mosques, temples and churches, at friends’ places and in rooming houses and hostels. The Asylum Seeker Resource Centre in West Melbourne states that asylum seekers move an average of eight times in an attempt to find suitable accommodation.

Dariq, a 42-year-old asylum seeker from Pakistan, says he slept with his wife and three young children in a room the size of a “chicken pen”. He explains: “We had one, two, three mattresses on the ground and we had to lie down, next to [each other]. And there was no space left.”

The family arrived in Australia in February 2010 and quickly ran out of funds. “When you convert Pakistan’s money, this money becomes so little,” says Dariq. They had few possessions and only sheets to keep them warm at night. “We did not have cooking pots, we did not have glasses, we had only one or two cups. If you have your family with you, three little kids, you have to worry.”

Eventually Dariq approached the House of Welcome for blankets, pots and pans. Although he was at a crisis point, initially he didn’t want help finding accommodation. O’Connor, who is the family’s caseworker, says most asylum seekers don’t want to be dependent on charity: “They try to make it on their own, which is contrary to what is portrayed in the media – that they’re here for better lives and benefits and things like that.”

So why did Dariq come to Australia? He rises from his seat, eyes wide. He points to his right kidney, his right chest and a spot below his left collarbone. “I didn’t want to be an asylum seeker,” he says. “I was shot three times.” The Taliban even fired at his car while he was sitting inside with his young daughter.

Shanti, a 54-year-old woman from Malaysia, also came to Australia fearing for her safety. A Hindu, she fled a violent husband and religious persecution in a Muslim-dominated culture. Despite limited English, she’s very talkative. Her story tumbles out of her mouth almost unprompted. She arrived in April 2009, she says, and lived in a rooming house in Wangaratta, before moving into a hostel in central Melbourne with financial assistance from the Red Cross.

“One time I’m very sick because I’m very upset I stay there [at the hostel]. I went to overdose,” she says, the words coming more slowly now. “I just take the medicine for the depression, sleeping tablet. Then I don’t know what’s going on.”

An ambulance took Shanti to hospital and she spent a week recovering. The night she returned, a drunken young man asked to have sex with her roommate, another middle-aged woman from Malaysia. He kept knocking on the door, so the two women called the police. After the incident, they decided it was time to leave. “The backpackers’ is really not safe,” says Shanti.

The Department of Immigration and Citizenship has since rejected Shanti’s initial application for a protection visa. But in Australia the determination process for refugee status has multiple stages, so Shanti should have the option of appealing to an independent tribunal. She should, but she doesn’t. Why? Her invitation to appeal was sent to an old address and she missed the cut-off date. Now she has to take her case all the way to the Federal Court.

“Homelessness and moving around can really mean that information just falls through the gaps,” explains Amy Watson, Shanti’s caseworker. This is happening across the board. In Queensland and New South Wales, caseworkers say the same thing: asylum seekers are missing vital information about their applications due to homelessness.

A letter might not seem like a big deal. But let’s not forget what is at stake. Asylum seekers are often fleeing for their lives, and a wrong decision to send them home could be disastrous. Anything that might jeopardise their legal case is of monumental importance.

A single letter from the Department or Tribunal could be pivotal. The Refugee Review Tribunal cannot extend the time limit if an asylum seeker – like Shanti – misses the cut-off date to appeal. Then there are other legal notifications. A 2009 Federal Court judgement states that failure to comply with a “formal invitation” has “adverse consequences”, because the Tribunal may make a decision without inviting the applicant to appear at a hearing. This puts asylum seekers without a fixed address at a significant disadvantage.

Even if they do receive that all-important letter, what then? It’s hard to think about your legal case when you’re trying to feed and house your children. O’Connor tells the story of a male asylum seeker, a father, whose “whole thought process around his asylum claim had disappeared because he was just so focused on trying to get out and find that roof over his head”. He was highly stressed and had a family to support: “If his interview came in the middle of that, there is no way he could present a proper case.”

Thankfully, Dariq and Shanti have found accommodation through the House of Welcome and Hotham Mission Asylum Seeker Project, in collaboration with other charities. Most of the funding comes from church groups and donations, so there’s a real risk of financial failure. What if these safe havens didn’t exist?

“We would have ended up on the streets,” says Dariq.

As for Soriyan, in June he took yet another train trip. This time it was on the Glen Waverley line. He got off at the final stop and walked three blocks to a brown brick house with a neat lawn and cypress trees out the front. A caseworker from the Hotham Mission Asylum Seeker Project was waiting for him. She opened the door, and together they walked inside. The constant commuter had finally reached his destination.

The asylum seekers’ names have been changed. This article is available for re-publication. Email greg.foyster@gmail.com for details.