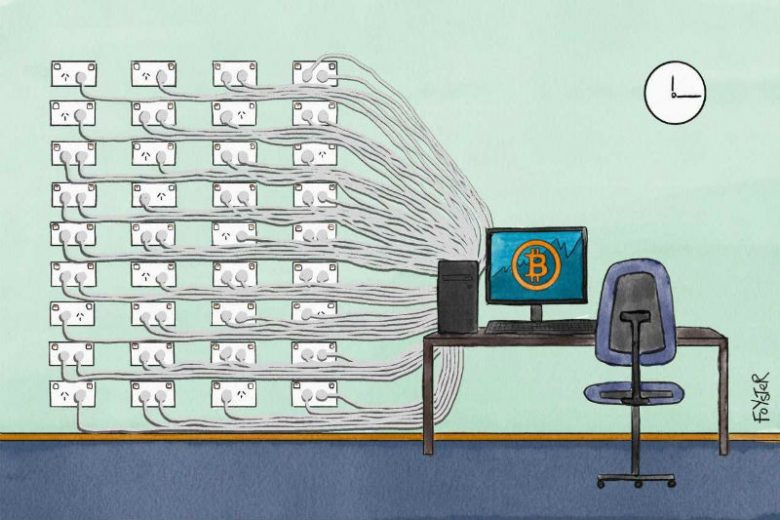 Crazy, isn’t it? These figures, updated in real time, were calculated by Alex de Vries, a blockchain analyst at big accountancy firm PricewaterhouseCoopers. He takes an economic approach, assuming that Bitcoin miners operate at their marginal costs, mostly electricity to run powerful computer processors. As the price of Bitcoin has soared, so has the amount of electricity that data centres are willing to burn in pursuit of this virtual bounty.

The result is a transaction system many thousands of times more energy-intensive than a conventional platform like Visa. Other calculation methods have come up with lower estimates, but they’re still several orders of magnitude higher than existing platforms.

Bitcoin boosters dispute these comparisons, and I’ll get to their counterarguments in a second. But first, here’s a rather simplified overview of Bitcoin and how it is ‘mined’. As you’ll soon see, high energy costs were a deliberate design choice of the currency.

First proposed in a paper by an anonymous author in November 2008, Bitcoin is a decentralised digital currency. It aims to remove the middleman in financial transactions. Individuals can send coins directly to each other, even across international borders, without going through a third-party intermediary like a bank.

The underlying technology is a distributed ledger. All the computer processors in the network have a copy, allowing them to verify it against each other. (To get the gist, imagine a Google Doc spreadsheet shared for group-editing with millions of other users.) Computer processors on the network verify the transactions by applying a mathematical formula to create a ‘hash’, which is a unique string of letters and numbers.

When a computer successfully generates a hash, it receives Bitcoins as a reward. This is referred to as ‘mining’ because, like mining for gold, you’re expending resources to recover something unique from a finite supply (the protocol dictates only 21 million Bitcoins will ever be created). In this case, the resources expended are computer processing time and electricity.

To make it more difficult, and so that not all the coins are mined at once, the hash has to have a certain number of zeros at the front to be accepted. The first computer in the network to create a valid hash, ‘solving’ the block, wins the prize.

This has created a computer processing arms race. The more hashes a computer can generate in a second, the greater the likelihood of winning. In the early days people used to be able to mine Bitcoins on ordinary PCs, but now most of the mining is done by specialist hardware in huge data centres, located in countries where electricity is cheap. The majority are in China, and because they’re running 24/7, they’re most likely to be powered by burning coal.

Escalating energy intensity is actually a security feature of the currency. To fraudulently modify a previous transaction block, an attacker would have to redo the calculations (referred to as ‘proof of work’) of that block, plus all the blocks after it, and then catch up with and surpass the work of all the honest computer processors in the network. If mining each transaction block requires an extraordinary amount of electricity, then the energy needed to trick the system is so great it’s practically impossible to do it. ‘The system is secure as long as honest nodes collectively control more CPU power than any cooperating group of attacker nodes,’ explains the original Bitcoin paper.

Improvements in computer processing power won’t make the system more efficient because each transaction block is supposed to take an average of ten minutes. As processing power increases, the level of difficulty is increased to slow things down.

With the related carbon dioxide emissions from this escalating electricity consumption, Bitcoin is a formula for climate change catastrophe.

That brings me to the counterarguments to these claims.

One is that Bitcoin miners can be powered by renewable energy. Some are attached to hydro-electric dams in China or geothermal in Iceland, and there are plans for solar and wind powered miners. This is very commendable in theory, but as economist John Quiggin points out in The Conversation, we should be building renewables to shut down coal, not to keep up with additional demand created by Bitcoin. ‘So Bitcoin mining is effectively slowing our progress towards a clean energy transition — right at the very moment we need to be accelerating.’

A second counterargument is that Bitcoin mining is actually less destructive than the fiat currency system it aims to replace. Here’s a classic example from the cryptocurrency news site Cointrader: ‘Gold mining burns a staggering 132 terawatt-hours per year. What’s more, these numbers don’t even include the massive amount spent on vaults, banks, security systems and more to keep the physical cash and precious metal safe.’

But the problem here is one of scale. The global financial system services the entire world, but Bitcoin is still a niche market for a couple of million people, most of whom are currency speculators. If we scale up Bitcoin to match the size, reach and everyday accessibility of the existing system, its energy consumption would be enormous because there’s so much wasted computing power involved in each transaction. And remember that wastefulness — computer processors competing to solve each block, essentially doing the same work millions of times — is a fundamental and deliberate design feature of the currency.

But there are alternatives. Other digital currencies, such as Litecoin, use a different cryptographic algorithm that doesn’t encourage the same specialised, custom hardware to mine it. This has meant less of a computer processing arms race. The coins Ripple (XRP) and Stellar (XLM) have been designed for fast and efficient transactions. And there’s a push to shift from Bitcoin’s processing-intensive ‘proof of work’ method to a ‘proof of stake’ approach, which would be much more energy efficient.

Plus the underlying technology — blockchain — has huge potential for solving persistent problems in the clean energy sector. IBM is collaborating with a Chinese firm to use the technology for China’s carbon trading scheme, and a US startup uses blockchain to allow solar panels owners to sell their surplus power to neighbours.

Bitcoin might be heralded as a breakthrough innovation, but right now it has a massive energy problem.