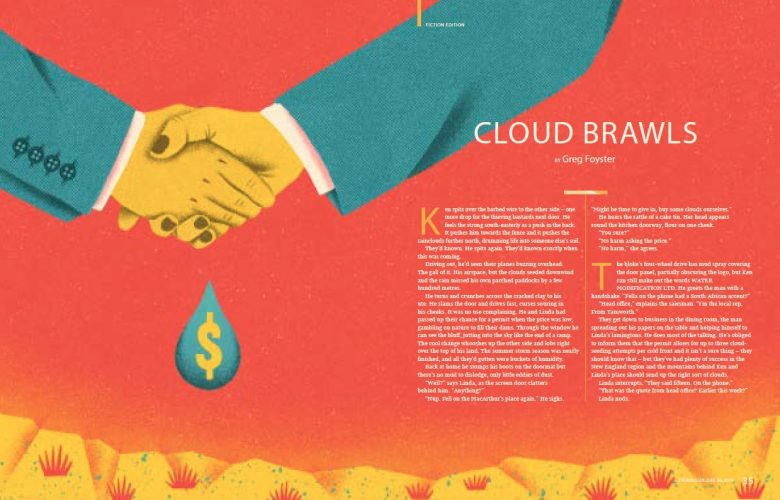 This short story was first published in The Big Issue Annual Fiction Edition 2019, one of nine stories picked from 424 submissions.

KEN SPITS OVER the barbed wire to the other side – one more drop for the thieving bastards next door. He feels the strong south-easterly as a push in the back. It pushes him towards the fence and it pushes the rainclouds further north, drumming life into someone else’s soil.

They’d known. He spits again. They’d known exactly when this was coming.

Driving out, he’d seen their planes buzzing overhead. The gall of it. His airspace, but the clouds seeded downwind and the rain missed his own parched paddocks by a few hundred metres.

He turns and crunches across the cracked clay to his ute. He slams the door and drives fast, curses souring in his cheeks. It was no use complaining. He and Linda had passed up their chance for a permit when the price was low, gambling on nature to fill their dams. Through the window he can see the bluff, jutting into the sky like the end of a ramp. The cool change whooshes up the other side and lobs right over the top of his land. The summer storm season was nearly finished, and all they’d gotten were buckets of humidity.

Back at home he stomps his boots on the doormat but there’s no mud to dislodge, only little eddies of dust.

“Well?” says Linda, as the screen door clatters behind him. “Anything?”

“Nup. Fell on the MacArthur’s place again.” He sighs. “Might be time to give in, buy some clouds ourselves.”

He hears the rattle of a cake tin. Her head appears round the kitchen doorway, flour on one cheek.

“No harm asking the price.”